I was just forwarded a Bloomberg article by a good friend along with a note that she finally understood -kinda- what it is we do. Many, my own family included, believe that economists spend their days coming up with theoretical models for what could happen in the market.

I’ve spent a fair amount of time trying to explain that applied microeconomics is focused on empirical work using data. Justin Fox describes his favorable view of the shift in the Bloomberg View stating, “Theory is inevitably a bit arrogant; exploring the data isn’t.”

The chart below beautifully demonstrates the trend he’s describing.  At Causal, our portfolio is split roughly into thirds between the Black, Blue, and Green categories. We love theory, but we will let our academic friends focus on that. In the meantime we get to stand on their shoulders. 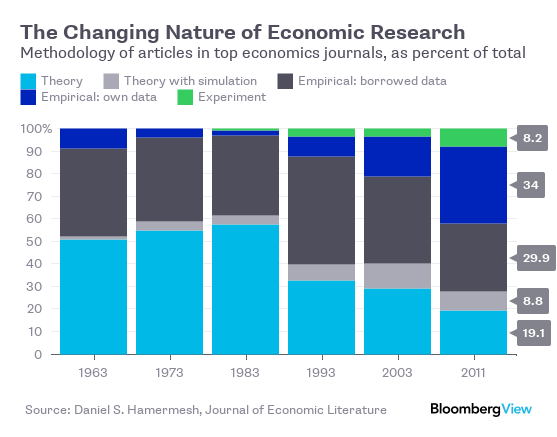 A final quote from Mr. Fox to keep us all in check, “Thanks to the empirical boom, economists know more than ever before. But they seem to be learning that they are still awfully far from knowing everything.”