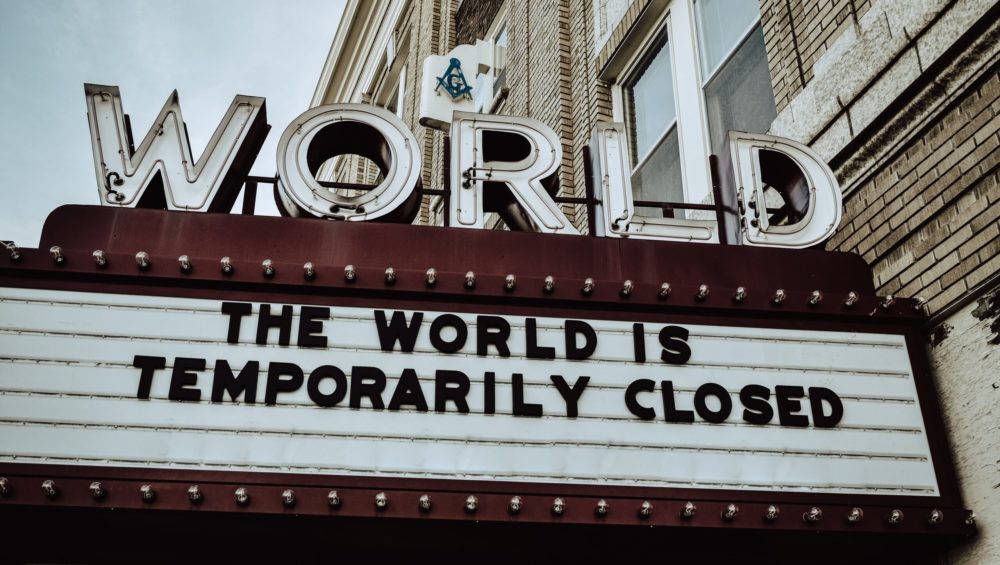 As we all grapple with the immediate impacts of the COVID-19 virus on our lives and the lives of those in our families and communities, it can be difficult to zoom out and think about the possible impacts beyond our town, city, and/or nation. It is nearly impossible to wrap our heads around the uncertainties the pandemic has presented for our own future, much less the future of 7 billion others.

However, the COVID-19 pandemic is a global phenomenon and the health and economic impacts and policies across nations and people are intrinsically linked. While the possible ramifications are, at this stage, extremely uncertain, it is important to begin thinking about how the pandemic may directly–and indirectly– impact human well-being and economies around the globe, both now and into the near future.

Health experts have repeatedly acknowledged that we do not yet have enough data and information about the COVID-19 virus and thus project that impacts lie within a huge band of uncertainty. To confidently estimate or project loss of human life from COVID-19 we need to know the number of people who have died from the virus (fatality rate) and how many have been infected (or are likely to be infected) in a given sample (infection rate).

The key issue, which experts have deemed the ‘denominator’ problem, is that we have no idea how many people are carrying the virus, which means it is very difficult to accurately estimate its infection and fatality rates. In the context of a lack of data, some experts are trying to address the knowledge gap.

David Lipsitch, an epidemiologist and professor at the Harvard’s Center for Communicable Disease Dynamics, has ventured a broad estimate that 20 to 60 percent of the global adult population could get the virus (revised down from a previous estimate of 40 to 70 percent). Given that testing kits are still in extremely short supply and that we still don’t know enough about susceptibility and transmission of asymptomatic individuals, this type of estimate is likely the best we will have for a long while.

In an address in early March, the WHO’s Director-General, Dr. Tedros Adhanom Ghebreyesus, suggested that the fatality rate of confirmed cases was around 3.4 percent. However, early fatality rates are skewed by confirmed/severe case bias and spotty surveillance of a rapidly moving virus. Since that estimate, the number of known cases of the virus has shifted rapidly towards Europe and the U.S. and the current known case rate and fatality rate fluctuates daily as more data from around the world rolls in.

Epidemiologists and scientists suggest that the global fatality rate from the virus is likely to be half or even one-sixth of the 3.4 percent fatality rate cited above (given the ‘denominator’ measurements problem). John P.A. Ioannidis, a professor of medicine and epidemiology and population health at Stanford, posited that the worst case scenario may look more like a 1 percent fatality rate once we get a hold of more accurate data.

The economic toll of COVID-19

On the other hand, the economic ramifications of efforts to contain the virus are beginning to materialize. Cascading policies to shutter non-essential businesses and/or urge citizens to ‘shelter in place’ for at least two weeks–and likely longer–in Europe and the U.S. do not bode well for the global economy. As more and more countries put in place ‘shelter in place’ orders or lockdowns to contain the spread of COVID-19, the global economic impacts (both short term and longer term) are likely to become more apparent.

In a recent statement, IMF managing director Kristalina Georgieva cautioned of ‘a recession at least as bad as during the global financial crisis or worse.’ This type of impact would be devastating to the global economy and well-being across the world. On the bright side, Dr. Georgieva ‘expect[s] a recovery in 2021’, though the path and staying power of the COVID-19 virus (and the extent of subsequent policies to contain it) are still uncertain.

On March 26th, the Organization for Economic Development and Cooperation (OECD) reduced its global growth estimates for 2020, positing that current containment measures could reduce global economic growth by 2 percent per month. Angel Guerria, the Secretary General of the OECD, suggested that ‘the pandemic has also set in motion a major economic crisis that will burden our societies for years to come’ and that ‘the sheer magnitude of the current shock introduces an unprecedented complexity to economic forecasting’.

Despite the complexity and uncertainty, it is possible to model scenarios that lie within the confidence bands of international experts to start to think about the impacts of and recovery from the pandemic. Using the International Futures (IFs) global integrated assessment model, which is a public, open-source model housed at the University of Denver, it is possible to create scenarios that help assess the possible global impacts of COVID-19 itself, and the effects of policies attempting to contain the virus now and into the future.

The two sets of scenarios below are roughly based on the expert opinions cited above and are meant to illustrate the bounds of possibilities by presenting roughly a ‘low impact’, ‘medium impact’, and ‘high impact’ scenario for both infection and death rates and economic growth rates.

They are, for simplicity’s sake, set up as two separate sets of scenarios meant to estimate the impacts of 1) loss of life from COVID-19 and 2) reduction in growth rates from policies to contain COVID-19 in 2020. In reality, the world will experience some elements of both loss of life and economic loss, along with a number of other unforeseen impacts over the short to medium term. Or in other words, one will likely compound the other.

The infection and death rates in the loss of life scenarios are applied to the entire population. In the scenarios, COVID-19 deaths are categorized as a respiratory infection, respiratory disease, and malignant neoplasm deaths – categories taken from the WHO’s International Classification of Disease (ICD) – to approximate the mortality profile of the virus (as far as we know now).

The economic growth scenarios revolve around the medium estimate, which simulates a drop in global growth similar to that of the global financial crisis in 2008. From 2007 to 2009, global growth rates dropped from 4.3 percent to -1.5 percent, a drop of approximately 5.8 percent.

In each of the loss of life scenarios, more than 66% of all deaths occur in people aged 65 and older, infant mortality rates spike, and global economic growth slows significantly in the years immediately following 2020. By 2030, the global economy loses between $2 trillion and $8 trillion over the next ten years, compared to the pre-COVID-19 growth trajectory.

In the economic impact scenarios, global growth rates fall in 2020, but generally rebound to previously projected levels in 2021 and beyond. That said, the drop in growth rates translates to a global GDP reduction of between $2.5 trillion and $8 trillion in 2020. To put that in perspective, $2.5 trillion was the approximate output of Brazil, the 8th largest economy in the world in 2019, and $8 trillion approximates the total GDP of Japan and Canada (the 3rd and 11th largest economies in the world), combined, in 2019.

Projections of economic growth impact compared to past growth: 2004-2026

Over the course of the next 10 years, the one year drop in global growth reduces the total output of the global economy by between $29.5 and $96 trillion. In the high economic impact scenario, this is the equivalent of losing the entire GDP output of the United States more than 5 times over the next 10 years.

While these scenarios aggregate the economic and loss of life impacts globally, there will inevitably be disparate impacts across countries, cities, and specific populations. For example, more developed countries have higher portions of the population that are older than 65 (who are at significantly higher risk) than less developed countries, whereas lesser developed countries may have less capacity to provide the basic health supplies and testing capabilities needed to deal with a pandemic.

What happens when/if the virus spreads rapidly to sub-Saharan Africa or South America? New York City has been a global hotspot for the disease due to population density and lack of early social distancing measures. It is hard to imagine what will happen when the virus enters a densely populated informal settlement in Addis Ababa or Johannesburg where social distancing is nearly impossible and basic hygiene products are already in short supply.

Already we are seeing shortages of the necessary health supplies in the United States and there is evidence to suggest that developed nations are crowding out developing nations’ access to necessary testing and medical supplies. Further, the economic impacts of a sudden halt in consumption of many globally connected goods and services in the U.S. and developed nations now will reverberate through the global production chain.

Lesser developed countries are generally and more reliant on global economic demand than in more developed countries. A global economic recession on the level of the Great Recession could disproportionately affect the livelihoods of enormous swaths of young people, many of whom are engaged in informal or service related work that rely on global capital inflows from tourism and foreign direct investment or consumption.

Moreover, if loss of life from the virus impacts older populations in less-developed countries (as it has in developed countries), the youth bulge – or ratio of 15 to 30 year olds compared to the rest of the population – could become even larger than it already is. This could have implications for political stability and likelihood of violent conflict.

Large male youth populations, in the context of rising youth unemployment and perceived economic and power grievances, have been linked to increased risk of violent conflict. A severe and protracted economic recession paired with draconian lockdown policies from authoritarian leaning regimes could prove to be a fertile environment for increased political violence, especially in places that have recently experienced conflict.

The WHO has already reported a striking increase in domestic violence since cascading ‘shelter at home’ orders have spread across the globe. This type of increase in domestic violence could severely affect the short and long term well-being of women and children in vulnerable situations and may be a signal of underlying tension and frustration individuals are feeling right now.

Additional fear and isolation could stoke the fires of polarization and nationalism that were increasingly evident prior to the pandemic. Global spread of a virus is inherently tied to international human movement, whether it be through commerce, leisure, or forced migration. Refugee camps, which are often crowded and underfunded, and those fleeing conflict are often at higher risk of contagion. Will countries return to beggar-thy-neighbor trade policies and/or use the pandemic as an excuse to tighten migration control?

There are still an enormous number of questions that are unanswered and will likely go unanswered until we are able to gather more data on the spread and impact of the COVID-19 virus. With this initial modelling effort, and the thoughts on possible impacts, we hope to help frame possible pathways in order to grasp the scope of the economic and health impacts this pandemic will have on lives across the globe.